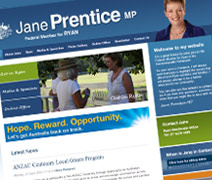 In fact, from an IT point of view few members would be as closely aligned with their electorate as Jane. Before entering political life as a Brisbane City Councillor, Jane ran an events business concentrating in the telecommunications sector, and sat on the Queensland Board of the Australian Telecommunications Users Group (ATUG).

As she says in her maiden speech:

…I took that passion and understanding to the Brisbane City Council, where I campaigned for an optic fibre ultra-high-speed broadband network to every premises in Brisbane to really entrench Brisbane as Australia’s new world city. The goal was to provide open access to all potential users on equal and equitable terms. We assessed the technical, financial and revenue risks as well as alternatives for implementation. The council came up with a robust case and financial model, followed by a successful trial. The plan was feasible, affordable and it did not cost government—and, indeed, taxpayers—tens of billions of dollars. It brought together the best in the business and provided clear demonstrations of what government and business can do together.

Jane was also one of the first politicians to have her own website, which we built in 2004.

Now we’ve done it again, with the launch of www.janeprentice.com.au.

Many of the features that have become commonplace in Australian politicians’ websites were pioneered by Jane. Her original website featured:

The petition site formed the basis of the technology that Internet Thinking supplies to government bodies, NGOs and community action groups.