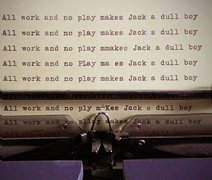 Never heard of Wilbing? Well I’m not sure the word has really been coined, it probably still dwells as an acronym in some sort of linguistic limbo, but Workplace Internet Leisure Browsing (WILB) is good for your productivity according to Melbourne University research.

Dr Brent Coker claims that “People who do surf the Internet for fun at work – within a reasonable limit of less than 20% of their total time in the office – are more productive by about 9% than those who don’t.” If one assumes that the one who don’t Wilb, work all the time that actually makes the Wilbers 29% more productive, because they lose 20% of their time to start with.

According to the study of 300 workers, 70% of people who use the Internet at work engage in WILB. Among the most popular WILB activities are searching for information about products, reading online news sites. Playing online games was the fifth most popular, while watching YouTube movies was seventh.

“It’s the same in the work place. Short and unobtrusive breaks, such as a quick surf of the internet, enables the mind to rest itself, leading to a higher total net concentration for a days work, and as a result, increased productivity.”

All of which has consequences for web strategy.

According to Melbourne Uni, it’s OK for employees to spend 1.6 hours a day surfing the net while at work. I suspect it’s more time than most adults would spend at home on the Internet and I suspect they may do different things at home than what they do at work.

Of course I knew that. On Line Opinion’s busiest times have been around lunchtime and late at night since the day we started publishing 11 years ago.

Which means that for us, it is important to send the email newsletter out during the day, but not that crucial that we make 9:00 a.m. when work starts, but rather a later time when concentration starts to wain and workers look for some refreshment.